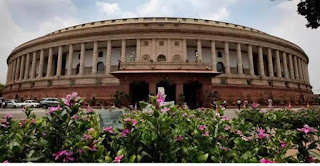 The Rajya Sabha passes the Jalianwala Bagh National Memorial (Amendment), Bill, 2019. The Lok Sabha discussing air pollution and climate change as a part of a discussion under rule 193, a rule that does not allow voting after the discussion. Meanwhile, the Congress has given an adjournment notice on the withdrawal of SPG protection to Rahul and Sonia Gandhi. Trinamool Congress, Republican Socialist Party and Muslim League have given adjournment notice on the JNU students’ protest and the police action following it.

Here are the live updates:

Rajya Sabha | 5.00 p.m.
The Surrogacy (Regulation) Bill, 2019 is taken up for discussion.
M.V. Rajeev Gowda (INC) says that we will be going back to the Victorian era by including only married couple as beneficiaries of surrogacy in the Bill. A woman's job is not inherently to give birth, so the costs that they bear should be suitably addressed. Reproductive labour of the woman should be acknowledged and the woman should be compensated, he says. He says government consent must be left out for abortion in surrogate pregnancy.
Rajya Sabha | 4.50 p.m.
Rajya Sabha passes the Jallianwala Bagh National Memorial (Amendment), Bill, 2019, which removes the Congress president as a trustee.
The Congress chief was a permanent member of the panel. The Bill amends this to include the leader of largest Opposition party in Lok Sabha as a member. The Bill was deferred and could not be passed in the Rajya Sabha Sabha in the last session due to the absence of a broad consensus on the legislation.
Lok Sabha | 4.45 p.m.
Dr. Kirit Premjibhai Solanki (DMK) quotes Coleridge's Rime of the  Ancient Mariner and says "the current day version of the lines 'Water, water everywhere, all the boards did shrink, water, water everywhere not a drop to drink' would be 'air, air everywhere, polluted our lungs will shrink, air air everywhere, oxygen bars everywhere". She says air pollution is a health emergency plaguing not just parts of India, but throughout. It is a problem of posterity, a problem for the next generations, she says. It is not just an environmental issue but a health issue, she says and quotes Emerson, "we don't inherit our earth from our ancestors but borrow it from our children. Pollution is causing stunted lungs in children".
Lok Sabha | 4 p.m.
Pinaki Mishra (BJD) says he salutes the government to adhere to the Paris Accord, after the UPA government signed it. He asks that the government put measures in place to stop stubble burning. He also says that fireworks manufactured here are of poor quality and they contribute to air pollution as well.
China has cut down on coal foundries, he says.
Lok Sabha | 3.45 p.m.
Manish Tewari (INC) asks why the government does not say anything about air pollution in Delhi. He says this is not just a question of air pollution, but also of our rivers, lakes and glaciers.
He says it is their duty to care for the environment.
Rajya Sabha | 3 p.m.
K.K. Ragesh, CPI(M) says he doesn't know why the government is so eager to take control of the trust as they didn't have any role in the struggle. “Why do you want to rewrite history?” he asks.
Tiruchi Siva (DMK) says the place has been transformed and there is no sense of what happened there. He says before trusteeship is changed, the government should make sure there are adequate boards and information in the site so people know history.
Sukhendu Sekhar Ray is in the Chair.
Swapan Dasgupta (Nominated) says there is no one alive today who participated in the events of Jallianwala Bagh. He supports the Bill.
Balwinder Singh Bhunder (SAD), says what is wrong if the largest opposition party’s leader is a trustee. “Is this not a democracy?”
Ritabrata Banerjee, Independent says that Tagore renounced his knighthood. He wants a statue of Tagore at the memorial.
Lok Sabha | 3 p.m.
House reconvenes and Zero Hour is on.
Rajya Sabha | 2.30 p.m.
Sukhendu Sekhar Ray of the Trinamool Congress speaks next. He says that it is not properly maintained.
S. Muthukaruppan (AIADMK) supports the Bill. He is followed by Ram Gopal Yadav (SP).
Prasanna Acharya (BJD) says the Congress party cannot be separated from this trust. He asks the government to be magnanimous at this time.
Ram Chandra Prasad Singh, JD(U) says he supports the Bill. He says the opposition speaks about magnanimity but didn't give Bhagat Singh a Bharat Ratna.
Rajya Sabha | 2 p.m.
Harsh Vardhan, Minister of Health and Family Welfare, withdraws three Bills.
The House takes up the Jallianwala Bagh National Memorial (Amendment) Bill, 2019 for consideration and passing.


Partap Singh Bajwa (Congress) says that the party played an important role in the Jallianwala Bagh massacre. Shwet Malik of the BJP says that a memorial commemorating the freedom struggle should not be subject to politics.

Mr. Malik says that only after the BJP government came to power has the memorial become clean and well-maintained.
Lok Sabha | 1:00 p.m.
Dilip Saikia, BJP, says NRL should continue as a PSU and should not be privatised.
Nihal Chand Chauhan, BJP, says the Rajasthan Government has not submitted requisite data to the Centre for availing benefits under the Ayushman Bharat Yojana.
Margani Bharat, YSRCP, suggests solar paneling for roofs, vertical gardening and other such measures. He cites China's 328 ft air purifier that produces 10 cubic metres of fresh air everyday.
Ganesh Singh, BJP, Madhya Pradesh, says farmers in the State do not receive the benefits under PM-KISAN. Last year, farmers did not receive their bonus, he alleges and asks that the Centre should intervene.
Bhartruhari Mahtab, BJD, asks what India stands to gain from becoming a part of BRICS and asks that the government come out with an answer.
Prof. Saugata Roy, AITC, brings up the JNU fee hike issue. He also condemns the lathi charge on protesting JNU students yesterday.
Suresh Pujari, BJP, Odisha, says insurance companies in the State have been derailing crop insurance measures.
Sukanta Majumdar, BJP, says para teachers are on indefinite strike in West Bengal. He urges upon the centre to address the issues faced by them in the State.
DNV Senthilkumar S., DMK, condemns Ramdev's terming of social reformist Periyar as a "Dalit terrorist" and says such a statement will not be taken lightly.
Krishna Pal Singh, BJP, asks for aid for farmers affected by excessive rain in Madhya Pradesh.
Omprakash Bhupalsinh, SS, Maharashtra, brings up the issues of farmers who have suffered losses due to excessive rains.
Lok Sabha is adjourned till 3 p.m.
Lok Sabha | 12:00 p.m.
Matters of urgent public importance are under discussion.
Kunwar Danish Ali, BSP, condemns the lathi charge on protesting students of Jawaharlal Nehru University and demands probe into the matter.
Adhir Ranjan Chowdhury, INC, condemns the withdrawal of SPG cover for the Gandhi family.
Pratima Mondal, AITC, speaks on the issue of public toilets and their usage by transgender individuals and persons belonging to the third gender. "Finding a gender-neutral toilet in India is almost next to impossible," she says.
Vanga Geethaviswanath, YSRCP, discusses the Polavaram project in Andhra Pradesh. She requests the Government of India to release the requisite amount for the completion of the project.
Prataprao Jadhav, SS, suggests that DBT amounts be sent directly to village post offices.
Dr. Bharti Pravin Pawar, BJP, requests aid for grape farms that have suffered losses due to excessive rains.
Suresh Kodikunnil, INC, discusses the issue of the Walayar sisters. There is a clear case of conspiracy to sabotage investigation into the issue, he alleges. He urges the GoI to seek a report from the Kerala Government on the case.
Dr. Nishikant Dubey, BJP, says Jharkhand is affected by Naxalites and terrorism. He says his constituency is afflicted with cyber crimes. He claims there is not much control over the Bangladesh, Nepal and Bhutan borders. Congress and TMC support Naxalism in the State, he alleges.
T.N. Prathapan, INC, Kerala, says it is undemocratic that the government is suppressing the voices of students in JNU. A high level investigation is needed into police atrocities against students yesterday, he says.
S. Jothimani, INC, discusses the incident of deceased toddler Sujith Wilson who had fallen into a borewell in her constituency. She says the child could have been saved if the NDRF would have been informed on time. This type of negligence happens because such children who fall into wells usually belong from poor families, she says.
Mala Roy, AITC, says the centre's plastic ban is futile without any sustainable alternative.
Tapir Gao, BJP, Arunachal East, says China has captured about 50-60 km of Arunachal territory. The media does not cover it, he adds. Another Doklam crisis might happen in Arunachal Pradesh if this is not looked into, he says.
Preneet Kaur, INC, says farmers of Punjab have been wrongly vilified over the stubble burning issue.
Lok Sabha | 11:30 a.m.
The Opposition continues to shout slogans.
Speaker Om Birla requests them to resume their seats.
Promotion of bio-fertilizers is the question under discussion.
P.P. Chaudhary, BJP, asks if pesticides should be banned in India as they have been in some other countries.
Kailash Choudhary, MoS, Agriculture and Farmers Welfare, says if zero budget farming and other reforms that have been introduced under the current government, would have been introduced earlier, cancer and other diseases among farmers would have reduced.
The next question is on skill development among farmers.
Kapil Moreshwar Patil, BJP, asks what difference is made by skill development programmes on farmers' earnings. Parshottam Rupala, MoS, Agriculture and Farmers Welfare, responds, saying even though no such survey has been done so far, farmers are being benefited by the programmes.
Ravindra Shyamnarayan, BJP, says Prime Minister Narendra Modi is sensitive to farmers' issues, in context of sugar mills.
Papers are laid on the table.
Rajya Sabha | 11 a.m.
House is in Session. Chairman M. Venkaiah Naidu is in the Chair.
The Chair reads out an obituary reference to Robert Mugabe, the former President of Zimbabwe.
Next, the Chair reads out a commendation to Abhijit Banerjee who won the Nobel Prize in Economics. Papers are now laid on the table.