Six killed after getting hit by avalanche at Siachen 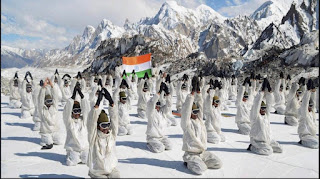 Army sources said the eight member team was proceeding to rescue someone who wasn't well in a post ahead when they were hit by the avalanche.

Four Army personnel and two civilian porters were killed after an eight-member team was buried under an avalanche about 20,000 feet on the Siachen Glacier on Monday.
“Despite best efforts, six casualties, which include four soldiers and two civilian porters, succumbed to extreme hypothermia,” the Army said in a statement. The eight personnel were operating in the northern sector of Siachen Glacier at an altitude of 19,000 feet.
Avalanche rescue teams from the nearby posts were rushed to the location for rescue work, the Army said. “All eight personnel were pulled out of the avalanche debris.”
Seven individuals who were critically injured, accompanied by medical teams providing critical care, were evacuated by helicopters to the nearest military hospital, where resuscitative measures were initiated, the Army added.

Army sources said the team was proceeding to rescue someone who wasn’t well in a post ahead.
Posted by Vaibhav shobha mahadev at 18:53