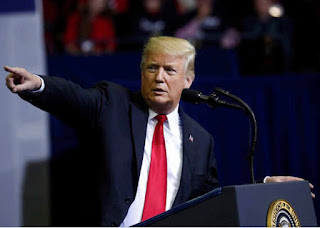 The Democrat-led inquiry is establishing whether the U.S. President withheld aid to Ukraine in return for an inquiry into ex-Vice President Joe Biden.
U.S. President Donald Trump on Tuesday described his impeachment proceedings as a “Kangaroo court” and alleged that the Opposition Democrats are using this for political gains.
In his first Cabinet meeting after the initiation of the impeachment proceedings against him by the House of Representatives, Mr. Trump said that House Speaker Nancy Pelosi, is using the USMCA, a trade pact between US, Mexico and Canada, to rope in lawmakers for a vote in the impeachment proceedings against him.
“I think the woman is grossly incompetent,” Mr. Trump said.
“All she wants to do is focus on impeachment, which is just a little pipe dream, he said.
“She can keep playing that game. And I’ve been told that she’s using USMCA because she doesn’t have the impeachment votes. She is using USMCA to get impeachment vote, Trump said.
The Democrat-led inquiry is establishing whether Mr. Trump withheld aid to Ukraine in return for an inquiry into ex-Vice President Joe Biden.
“It doesn’t matter, because right now you have a Kangaroo court headed by little shifty Schiff, he said.
A kangaroo court is a court that ignores recognised standards of law or justice, and often carries little or no official standing in the territory within which it resides.
Mr. Trump claimed that the Democrats are using the impeachment hoax for their own political gain to try to damage the Republican Party.
“But it’s had the opposite effect,” he asserted.
Posted by Vaibhav shobha mahadev at 19:21