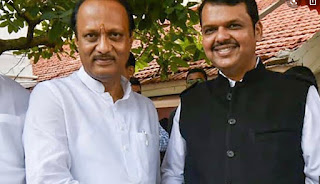 Addressing a press conference in Mumbai, Mr. Fadnavis said his Deputy Ajit Pawar had tendered his resignation earlier in the day.
“After Mr. Pawar’s resignation we don’t have the majority. We will not do any horse-trading,” Mr. Fadnavis said, adding that he would be meeting Governor Bhagat Singh Koshiyari to submit his resignation.
Blaming the Shiv Sena again for playing the “number game”, Mr. Fadnavis reiterated that there had been no agreement with the BJP’s former ally on the Chief Minister’s post.
Ajit Pawar, who only last week crossed over to the BJP camp and was sworn in along with Fadnavis in the early hours of Saturday morning, resigned earlier in the day.

Fadnavis made the announcement a day ahead of the floor test his government was supposed to face on Wednesday as per the Supreme Court's directions.

Holding a press conference here, Fadnavis said the BJP had decided from the first day that it would not poach MLAs to prove its majority.
He also accused the former ally Shiv Sena of being desperate for the chief minister's post and surrendering its "Hindutva" at the feet of Congress president Sonia Gandhi only to keep the BJP out of power.
Posted by Vaibhav shobha mahadev at 05:43