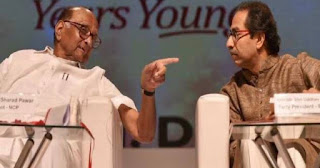 Nationalist Congress Party (NCP) chief Sharad Pawar on Friday said that NCP, Congress and Shiv Sena have unanimously agreed on Shiv Sena chief Uddhav Thackeray’s name for leader of the new government. Mr Pawar’s statement after the meeting of three parties at Nehru Centre makes it clear that Mr. Thackeray will be the next Chief Minister of Maharashtra of the tripartite government that is set to be formed.
“We have unanimously agreed that Uddhav Thackeray will lead the government,” he said, while leaving the meeting.
Mr. Thackeray, who left a few minutes after the NCP chief, said that the discussions were positive. “The discussions on all the subjects were positive. We have sorted out the majority of the issues and certain small issues are yet to be solved. Once those are cleared all three parties will hold a joint press conference,” said Mr. Thackeray.

There will be a press conference tomorrow after everything is finalised," said the former Union minister, who is at the centre of government formation talks in Maharashtra, where assembly poll results were announced nearly a month ago.

Thackeray, who emerged from the meeting soon after Pawar, said the talks were held in satisfactory manner.

"The talks (on government formation) are progressing in the right direction. Nitty gritties are being discussed now. All the three parties will come before you and all details will be shared after finalisation," he said.