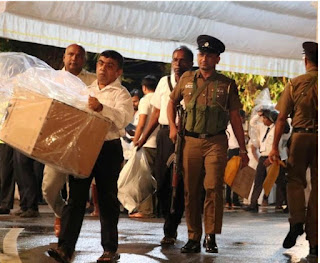 Both Rajapaksa and Premadasa camps see high numbers as good augury
As voting ended on Saturday, the rival political camps of Gotabaya Rajapaksa and Sajith Premadasa in Sri Lanka’s presidential election appeared confident that the high turnout would push their candidate past the required 50% mark. A second round of counting will be undertaken to tally preference votes if neither contestant secures over half the vote share.
“Going by the high turnout, it looks like there is a very strong anti-incumbency sentiment,” said Namal Rajapaksa, legislator and nephew of Mr. Gotabaya Rajapaksa. “The fact that the whole country, including the north, has voted in large numbers shows that they all want to be part of this democratic process. It is a very healthy sign,” he told The Hindu.
Cabinet Minister Mano Ganesan said it was “very encouraging” to see the large number of voters exercising their franchise.

“Sajith Premadasa is quite popular in the south and he has proactively reached out to the minorities across the island in his campaign. We are quite hopeful that he will win,” he said.
Mr. Premadasa is banking heavily on the minority vote which is widely expected to go in his favour, since prominent Tamil (north-east and hill country) and Muslim parties have backed him this election. Moreover, many Tamils and Muslims are still fearful of Mr. Rajapaksa, who is accused of war crimes — he has denied them — and is linked to reactionary Sinhala Buddhist groups that have stoked anti-Muslim violence in the past.

The high Tamil turnout in the north and east is also seen as a rejection of repeated calls for a boycott from some political leaders.
“It [turnout] means that the Tamil voter is very pragmatic and knows what is really good for the Tamil people in the given context,” said M.A. Sumanthiran, Jaffna district MP and spokesman of the Tamil National Alliance (TNA). Post-war, engaging fully in the available democratic space is a “sine qua non”, he said, if the Tamils are to make any progress in achieving their political aspirations. “Our people understand this very well…boycott was never on the cards,” he told The Hindu.
Posted by Vaibhav shobha mahadev at 23:00