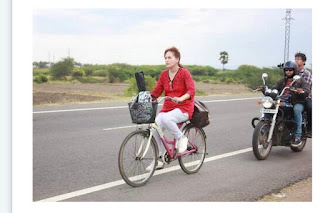 Amanda Wright is an Anglo-Indian music teacher who lives on her own in a quaint cottage in Coonoor — her husband left her for another woman many years ago and moved to Melbourne, where he died. Amanda habitually takes long cycle rides around the hills and dales.
Her peaceful life is turned upside down when she is diagnosed with multiple sclerosis, and she is suddenly overcome by the urge to hug her granddaughter she has never met.
Amanda, 60, sets out — on her trusty bicycle — to search for her estranged daughter and granddaughter, who live in Kolkata. When a friend tries to stop her from making the 2,200-km long journey, she tells him: “I need to prove to myself that I can do it. It’s my way of making amends with my daughter and granddaughter.”
This isn’t a true story — though it may well have been — but is the gist of Calcutta, I’m Sorry, an English feature film written and directed by Chennai-based Harry MacLure, a well-known face of the Anglo-Indian community. As a road film and human interest story, Calcutta, I’m Sorry has something for everybody — those who love unusual road trips, those who have an emotional connect with Coonoor or Chennai or Kolkata (or all three), and particularly those who have vivid memories of the days when members of the community were more visible in their cities.
“The germ of the idea came from an old aunt of mine who loved cycling. She had always nursed the idea of cycling from south India to Calcutta, but sadly never got down to doing it,” says Mr. MacLure, who was in Goa last week to attend the 13th edition of the NFDC Film Bazaar, South Asia’s largest film market. His was one of the 213 films showcased in the Film Bazaar’s Viewing Room.
“Many movies have been made with Anglo-Indian characters, such as George Cukor’s Bhowani Junction, Aparna Sen’s 36 Chowringhee Lane and the Merchant-Ivory production Cotton Mary. While all these films were made by non-Anglo-Indians, Calcutta, I’m Sorry has the distinction of being made by a majority of an Anglo-Indian cast and crew,” says Mr. MacLure.


Kolkata-based Priscilla Corner, who plays Amanda Wright, says: “Amanda and I are about the same age, so the physicality of the role was a cinch. The emotional landscape of her character was richly imbued with a variety of emotions, ranging from determination to disappointment, elation to uncertainty, and so, living, as I have, three years short of three score, naturally afforded me a vast bank of experience — of mine and others — from which to draw.”
Posted by Vaibhav shobha mahadev at 01:25