Midnight Hotel review: What happens when a butler, two guests and a vengeful ghost turn up at once 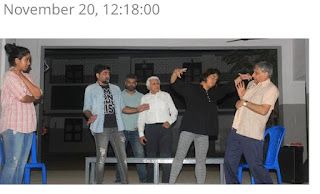 In this play, find out what happens when a family butler, two guests with peculiar connections to the past and a vengeful ghost turn up at the Midnight Hotel
What happens when Hari, a charming young man, returns home years after his brother’s death, to find out that it has been turned into a hotel by his sister-in-law, Usha? However, this mysterious hotel set in Puducherry keeps losing customers due to inexplicable spooky incidents. Enter Ronnie, the family butler, two guests with peculiar connections to the past and a vengeful ghost.
What ensues is a comic murder mystery revolving around the ghost, who terrorises residents until the case is solved. In The Madras Players’ latest production Midnight Hotel, get ready for a theatre experience packed with mystery, entertainment, romance and wit.
Directed by Victor Paulraj and written by author and playwright Shreekumar Varma, the play was first performed in 2009, when it was directed by veteran theatre director, the late Mithran Devanesan. At that time, Victor assumed the role of set and backstage manager. “I was drawn to the play as it has been written by a local writer and it was fun. It has taken 10 years for me to bring it all together and is a tribute to my mentor, Mithran,” says Victor.
The cast comprises PC Ramakrishna, Denver Anthony Nicholas, Balaji K Moorthy, Deepa Nambiar, Shakthi and Manoj Menon. Interestingly, Ramakrishna is the only actor who was also in the the original play, with a character that was specially written for him by the playwright.
This is Victor’s directorial début. A light and set designer who is well-versed in the technicality of theatre, he mentions that he had no qualms about the process, “Since I work in the realm of visualisation, it is easier for me to understand how the audience experiences theatre. I have retained the earlier script, only bringing modifications to the spacing, position and lighting.” The special effects and the set also actively participate in the narrative and the play is further supplemented by a challenging script that helps actors to push their boundaries.
A ‘whodunit’ with a twist, the evening promises a hilarious encounter with a ghost, filled with a riot of laughter, thrills and twists.

Posted by Vaibhav shobha mahadev at 22:31